Season in Review: 12u Mulder

The Lake County Stars 12U Team managed by Mike Mulder had a successful season in spite of the challenges brought about by the virus and subsequent delay in the playing schedule. 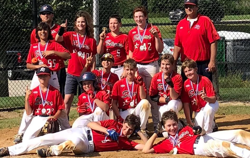 Games started early February with an indoor tournament in Rosemont.  The team was able to play against some high level competition and ended up with a tie in one game and losing the rest.  A disappointing start, but it gave them a dose of reality and to the work that needed to be done.

Then came the virus and a gradual suspension of practices and the start of the season.  The team made the best of it however by conducting weekly online team "chalk-talks" and studying video's of Major League hitting, fielding and pitching techniques, in addition to their own individual workouts.  Using his own diagrams and video, Coach Mulder also taught his team some basic game fundamentals including, rundowns, cutoffs and baserunning.

The team was finally able to play some practice games in Wisconsin during early June and began league play in late June and July.

After a slow start in Wisconsin, the team came together in league play, going on to finish the season winnning 14 of 16 before being kncocked out of the playoffs. This stretch included an 11 game winning streak as well as a first place finish at the first annual Lake County Stars Classic tournament.

The season ended on a high and a low note:  The second to the last game of the season, the team won an exciting game on a last inning grand slam by Will Moschea.   The team expected that dramatic win would create some great momentum going into the playoffs.  But it was not to be, and they were handley beaten in their first game.   "Baseball again taught us that it is a game of highs and lows and we have to be mentaly and physically prepared 100% of the time" said Coach Mulder.  "The game mirror's life and that's one of the reasons it's a great experience for the young players who compete".

Mulder's team has quickly moved on after the final loss and is already practicing for their Fall Ball league and planning to build on their successes during what was a challenging 2020 season for all.